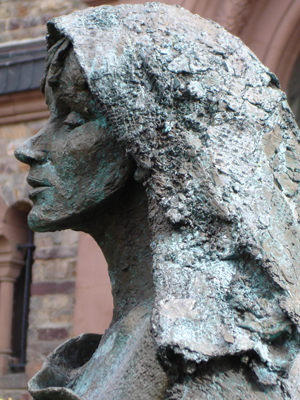 At a time when few women wrote, Hildegard produced major works of theology and visionary writings. She is the first composer whose biography is known. She composed 77 songs, including an “opera” or morality play set to music which was far ahead of its time. She left over 70 poems and nine books, and in an age when few women were accorded respect, she served as an advisor to bishops, popes, and kings. She used the curative powers of natural objects for healing, and wrote treatises about natural history and the medicinal uses of plants, animals, trees and stones. She founded two vibrant convents, where her musical plays were performed.

Note: In October 2012, Pope Benedict XVI canonized Hildegard of Bingen, and named her as a Doctor of the Church. There are 33 doctors of the Church; Hildegard is the fourth woman accorded this honor. We are delighted by this beautiful acknowledgment of the gifts of Hildegard to our world, and celebrate the continuing emergence of the sacred feminine in our time.

Child Gifted
Child Gifted  Hildegard was born more than 900 years ago (the summer of 1098) in the Rhineland valley of Germany. Hildegard, daughter of a German knight attached to the castle of Bickenheim, was the 10th child in the family. As was customary with the tenth child, she was dedicated at birth to the church, as a tithe. The girl started to have visions of luminous objects at the age of three, but soon realized she was unique in this ability and hid this gift for many years.

Anchoress Education
At a young age, the family sent Hildegard to an anchoress named Jutta to receive a religious education (Benedictine traditions included music, spinning, biblical history, prayer and work). Jutta, who was born into a wealthy and prominent family, and by all accounts was a young woman of great beauty, spurned all worldly temptations and decided to dedicate her life to God. Instead of entering a convent, Jutta followed a harsher route and became an anchoress. Anchors led an ascetic life, shut off from the world inside a small room, usually built adjacent to a church so that they could follow the services, with only a small window acting as their link to the rest of humanity. Food would be passed through this window and refuse taken out. Most of the time would be spent in prayer, contemplation, or solitary hand working activities, like stitching and embroidering. Hildegard’s education was of the most rudimentary form, and she often struggled with feelings of inadequacy stemming from her lack of education. She learned to read Psalter in Latin. Though her grasp of the grammatical intricacies of the language was never complete – she always had secretaries to help her write down her visions – she had a good intuitive feel for the intricacies of the language itself, constructing complicated sentences with multiple meanings that still pose a challenge to students of her writings. The proximity of the anchorage to the church of the Benedictine monastery at Disibode undoubtedly exposed young Hildegard to musical religious services and were the basis for her own musical compositions. After Jutta’s death, when Hildegard was 38 years of age, she was elected the head of the budding convent, but continued to live in her anchorage.

During all these years Hildegard confided of her visions only to Jutta and a monk named Volmar, who was to become her lifelong secretary. However, in 1141, a vision of God gave Hildegard an instantanteous understanding of the meaning of the religious texts. God commanded Hildegard to write down everything she would observe in her visions. “And it came to pass … when I was 42 years and 7 months old, that the heavens were opened and a blinding light of exceptional brilliance flowed through my entire brain. And so it kindled my whole heart and breast like a flame, not burning but warming… and suddenly I understood of the meaning of expositions of the books…” Yet Hildegard was also overwhelmed by feelings of inadequacy and hesitated to act. “But although I heard and saw these things, because of doubt and low opinion of myself and because of diverse sayings of men, I refused for a long time a call to write, not out of stubbornness but out of humility, until weighed down by a scourge of God, I fell onto a bed of sickness.”

Hildegard wanted her visions to be sanctioned, approved by the Catholic Church, though she herself never doubted the divine origins to her luminous visions. She wrote to Saint Bernard who took the matter to Pope Eugenius who exhorted Hildegard to finish her writings. With papal blessings, Hildegard finished her first visionary work Scivias (Know the Ways of the Lord) and her fame began to spread through Germany and beyond.

Migration to St. Rupert  As Hildegard’s sisterhood grew too large for the cramped quarters of Mt. St. Disibode, she received divine guidance to build a convent. Despite the monks’ protests, in 1151 Hildegard led the women to their new spiritual home at Mt. St. Rupert near Bingen and the Nahe River. In the new convent, she served as abbess and recognized only the archbishop of Mainz as her superior, freeing her community from the control of the former Abbott. Hildegard viewed this as a struggle in justice and the strife between the communities was not settled until just before her death 33 years later. She secured her community’s protection of the emperor and oversaw the construction of this new convent, which featured plumbing that piped in water. As Hildegard’s creativity continued to flourish, the convent grew to about 50 sisters. Her convent was known for the sisters’ exceptional gifts in music, singing and painting. In 1165, she founded another convent across the river. It consisted of about 30 sisters, whom she visited each week. Hildegard spent the rest of her days presiding over the convents, writing and preaching to clergy, laity, monks, nuns and ecclesial officials all over the land. She focused on the corruption of the church and was often asked for texts of her sermons. In her mid-70s she journeyed to Tours and then to Paris, outliving her secretary Volmar.

Hildegard knew about the power of music and its spiritual connection. In her 80s when she and her sisters had been interdicted for burying an excommunicated youth, she wrote a letter admonishing the archbishop. She said that he had silenced the most wonderful music on the Rhine. She spoke about how all the prophets wrote music and need music, and offered that those who choose to silence music in this lifetime will go to a place where they will be “without the company of the angelic song of praises on heaven.” The interdict was later removed before Hildegard’s death on September 17, 1179. In a letter written to her sisters near the time of her death Hildegard wrote, “I pray my voice may never fall into forgetfulness among you; may it rather be heard often in your midst in love.”

Sainthood
From the 15th century, Hildegard’s name was included in the Martyrologies and in Acta Sanctorum under the title of Saint. However, three previous attempts to formally canonize Hildegard were not successful. In 1979, Pope John Paul II referred to her as “an outstanding saint, a light to her people and her time who shines out more brightly today.” In October 2012, Pope Benedict XVI canonized Hildegard of Bingen, and named her as a Doctor of the Church. There are 33 doctors of the Church; Hildegard is the fourth woman accorded this honor.

If you’d like to learn more about your next opportunity to experience the beauty and delight of a Hilde Girls song circle, please visit our Events page. Thank you, and we look forward to seeing you!